You are here: Home / Pet Show 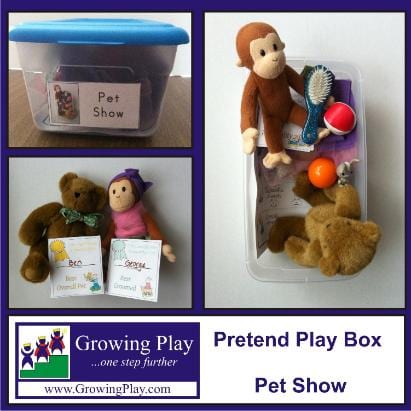 What’s Inside:  Inside this box is two small stuffed animals with jointed arms and legs, scraps of fabric, small brush, two balls, tiny pet and some printables from Pretend Play Animal Packet (Pet Show sign, pet show awards, pet show registration form and judging forms).  I wanted to put in the jointed animals so they can be bendable if the kids wanted to do a talent category with the animals.  Animal puppets would be fun to include.

What They Played: The 18 month old liked using the brush on the animals and enjoyed undressing them.

The older kids registered the pets for the show and picked some friends to be judges.  They dressed up the stuffed animals.  The scrap fabrics that worked best were long so the kids could wrap it around the animal many times and just tuck it in.  The fabric that worked best was tulle.  This turned into a fashion show not just a pet show.

One participant used the balls to create a talent show and the other participant did gymnastics with the stuffed animal.

After judging was completed, all the animals received an award.

Sign for the Box:   If you are creating your own boxes I added the sign for the box to the document.  You can view it at Pretend Play Box – Pet Show Sign

We use cookies to ensure that we give you the best experience on our website. If you continue to use this site we will assume that you are happy with it.Ok
Scroll to top